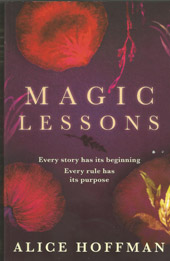 Anyone who has read Practical Magic by Alice Hoffman would have been intrigued by the centuries old curse on the Owen’s women:’ Any man who loves an Owens woman will die.’ Where did it come from and why? Now the long awaited prequel gives us all the answers and in true Alice Hoffman style takes us into the world of magic, mayhem and a fine romance. A time when those with the gift of the ‘unnamed arts’ were witches, and cause for superstition, intolerance and persecution with torture and death the penalty.

What I loved about this novel is the ease with which the author seamlessly blends history and fiction as we are transported back into the late 1600s, firstly in England in Essex County then across the waters to the island of Curacao and finally to the US , the ‘other’ Essex County and Salem, Massachusetts.   Hoffman has the ability to bring a place and time so instantly to life that you are part of it. Her books are a history lesson one does not easily forget. Emotional, gut wrenching and brilliantly imaginative this is where we meet Maria Owens and learn of the origin of the family curse.

It is 1664 and a foundling is abandoned in a snowy English field. The solitary healer Hannah Owens adopts her and from the beginning it is obvious that Maria has ‘the gift’. It is Hannah with her rare gift of kindness, who teaches Maria what she herself knows. They sit together with their ‘courage tea’ as the rules of magic are revealed. Maria is a talented and responsible student, but is warned to abide by the paramount rule:  ‘Do as you will, but harm no-one. What you give will be returned to you threefold’. But the suspicions of the time wreak havoc with these two women;  Maria is sent far away to Curacao and, when she is abandoned by the man she loves she invokes the haunting curse.

There is enormous depth to the story as it travels across the years to 1696 in colourful and absorbing detail. Hoffman is expert in describing human failures and intolerance as she explores the dark history of a misunderstood gift.  I would say that Hoffman has a magical pen, as the book is  enchanting, captivating in its realism and invoking all that spells, familiars (meet Cadin the crow) and healing remedies conjure up. You’ll recognise many of the remedies and sayings that our own mothers used when we were children. And they weren’t witches!

But Hoffman also captures the softness and joy of love, the nurturing of good people and the gifts that they bring. The book is an adventure in itself leaving you breathless as we meet memorable characters and learn that each rule has its purpose but the most important lesson is to: ‘Know that love is the only answer.’ 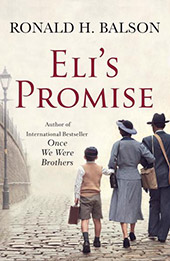 This was another first for me…so many books – how to choose? But on the recommendation of a friend I was fortunate to lay my hands on ‘Eli’s Promise’ by Ronald H Balson. Historical fiction that will resonate with so many, it brings the Holocaust into sharp perspective, its effect on one family, betrayal, greed and a search for justice.

Perhaps this shout sums it up well.” “National Jewish Book Award winter Ron Balson returns triumphantly with Eli’s Promise, a captivating saga of the Holocaust and its aftermath spanning decades and continents. Readers will not be able to put this book down, but will turn the pages compulsively with heart in throat, eager to learn the fate of the Rosen family. Balson’s meticulous historical detail, vivid prose and unforgettable characters further solidify his place among the most esteemed writers of historical fiction today.”
―Pam Jenoff, New York Times Bestselling Author of The Lost Girls of Paris

I could not agree more…this was a story that I devoured with a myriad of emotions as the story unfolds:  fury, heartbreak and frustration being but a few. Balson evokes all of this and more in his compelling narrative. But, as Balson says in his acknowledgements:’ Eli’s Promise is at its heart a story about corruption and war profiteering’.

War is wealth – we have seen it across the centuries, unscrupulous manipulation of government officials and incitement of the people. There are always those who make a profit out of war. And do they always come to justice?

It was this aspect that grabbed me in ‘Eli’s Promise’. As we move across three time frames: 1939/40 and the invasion of Poland, 1945 and a Displaced Persons camp and then finally to the Chicago of 1965 and the start of the Vietnam war we follow Eli Rosen and his quest for justice.

!939 and Eli Rosen, his wife Esther and son Izaak are residents of Lublin, Poland. Their lives are good – the family has a brickyard and construction company, and are a comfortable and loving unit. As the Germans march into Poland, annex the Jews, ransack their businesses and proceed to devastate the country, the family business has an important role to play in the German plans. But of course it cannot belong to a Jew. There is always a ‘fixer’ and he comes in the form of employee Maximilian Poleski. He has no scruples, he sees a gap, any gap and goes for it. Collaborating with the Nazis he promises to protect the family – at a price. And, as he becomes a trusted ‘friend’ of the Nazi officers he becomes more and more greedy, to the detriment of the Rosen family.

1945 and Eli and Izaak, barely alive, are rescued from Buchenwald by the Americans. The DP camp in Allied-occupied Germany is their temporary home as Eli searches for Esther, waits for a visa to the USA as Europe procrastinates on the Jewish refugee question. When Eli hears of a man selling illegal American visas there is an uncanny resemblance to the Max of the past.

Chicago 1965 and Eli rents a room in Albany Park. And here the novel takes on a thriller aspect. Political intrigue, corruption, the Vietnam war and the twenty five year search for Esther culminate in a climax that leaves you with some satisfaction. Smoothly traversing the three time zones and environments, Balson writes crisply and atmospherically. That some promises, a sacred oath to the Eli that gave them, fall out of anyone’s control is a continuous and utterly understandable theme and Balson has created an enthralling story.

I am reading Damon Galgut’s The Good Doctor.

A newly qualified doctor chooses to do his community service in an almost defunct hospital in one of the erstwhile homelands.

Galgut describes exquisitely the relationship between the new doctor and the man he shares a room with. The prose is beautiful; I feel I am in that forlorn hospital with the characters. 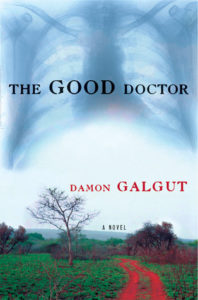 Pain by Zeruya Shalev.  Iris, an Israeli woman survived a suicide attack ten years previously and had to come to terms with the aftermath of physical pain as well as the loss of the love of her youth. Now after years of living without joy despite being married and having a family she reunites with him.
However, her son is soon to be drafted and her daughter has fallen under the influence of a cult like leader. Iris has to make a choice-passion against commitments. 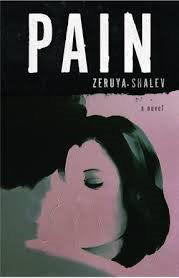 For a magical trip back into the 1960s and the hedonistic lifestyle enjoyed by many artists and writers, then this biographical novel will delight.
When the Silver family, parents Jack and Frieda with children Esther and Gideon, move to the Greek island of Hydra it is with the intention of repairing their marriage and serious writing. What they find is a sensuous and hypnotic group headed by the Australian writers George Johnston and Charmian Clift, who warmly welcome them.

Into this mix comes the young unknown Leonard Cohen, who meets the beautiful Marianne (remember the song ‘So long Marianne’) wife to very volatile and philandering Axel Jensen. It is love at first sight and a passionate affair engulfs them.
Affairs, drinking, debating and massive creativity are part of this groups’ raison d’etre and Hodes writes with great tenderness of the life and stories that unfold as a military junta takes over Greece and the island life is destined to change. I so enjoyed this book and was taken back to the swinging 60s and the gravelly voice of Cohen.

Hodes gives the island life and you are walking the paths, smelling the flowers, sensing the seasons and eating the food as you read. She paints a picture of a life long gone, when celebrities such as Onassis and Jackie Kennedy visited and enjoyed the bohemian artist’s colony that flourished there. 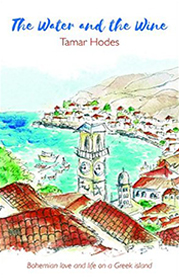 I’m still reading Thomas Harding’s Legacy, a fascinating account of the family that escaped the pogroms in Europe and subsequently became known for establishing Lyon’s restaurants and corner houses, famous in Britain for over a century. Of course, the subject matter is dear to Harding as it is his own family about which he writes and the story of the Salmons and Glucksteins in tandem with some 175 years of British history makes for a hugely satisfying package. I knew nothing about the legendary tea houses before reading Legacy, but this could be a wonderful nostalgic trip for anyone who used to visit during that era. A long but engrossing read.

I’ve just finished reading Alice Hoffman’s The World That We Knew, and the acclaimed author did not disappoint. In this novel, Hoffman weaves the thread of magical realism into the gritty and harsh factual retelling of the experience of children during the Holocaust, and what they had to do to survive. Set in Berlin, Paris and the French countryside, we follow the story of young Lea whose mother sends her in 1941 from Berlin to the (relative) safety of Paris, along with a female golem who will be her protector. This was a riveting and often heart-breaking read, a heavy subject treated with a sensitive touch. 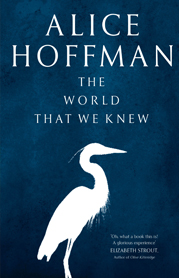 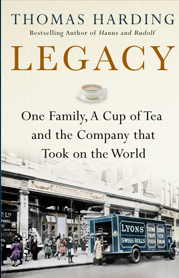 I am listening to The House by the Lake by Thomas Harding who is attending our festival.  It tells the story of a small lake house on the outskirts of Berlin that belonged to Harding’s grandmother’s family before World War II. With detailed research into the families that lived in the house through the decades, Harding writes a detailed history of Germany too. While not usually a fan of non-fiction, I have enjoyed this book a lot.

I am also reading Akin by Emma Donoghue, who is the author of bestselling book Room. Akin is about a New York professor Noah Selvaggio, a widower who is obliged at the last minute to bring his 11-year-old great-nephew, Michael, on a trip to his birth city of Nice for his 80th birthday. I have just started it but the difficult relationship of these two who have been forced together by circumstance is very gripping. 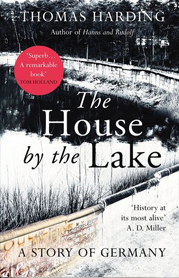 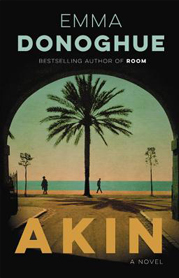 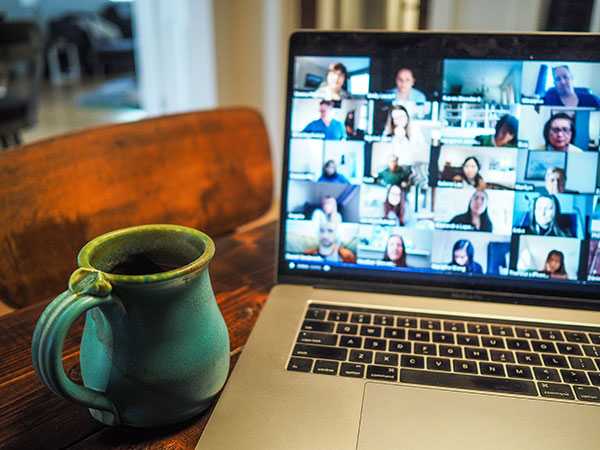